The Guildry Incorporation of Brechin was formed in 1629 by “a number of merchants and maltmen”, traders within the Burgh, and in 1666 the Incorporation obtained official recognition of its rights under Decree of the Convention of Burghs.

Guilds, including the crafts of the Hammermen, Glovers, Shoemakers, Bakers, Weavers and Tailors, flourished for a couple of centuries but have now ceased to exist.

The Guildry Incorporation of Brechin is, however, still very much alive. Although its ancient functions have lapsed, it has taken an active part in the civic and social life of the community for more than 3 centuries and it continues to do so.

Guild membership is maintained at around 130 members (some less involved than others!). There are 3 main events in the Brechin Guildry calendar:
• the “Kirkin of the Guildry”, now held on the first Sunday in June
• the Remembrance Day Service and Parade to the War Memorial
• the Guildry Dinner in the Mechanics Institute on the first Friday in December.

Any heritable assets that the Guild may have held have long been subsumed under the “Brechin Common Good Fund” which, since regionalisation in the 1970s has been under the control of Angus Council. The Guild’s sole income is from members’ annual subscriptions.

The main outgoings are:
• an annual donation to the Mechanics Institute Trust for the use of the Guild Hall and the other Halls within the Mechanics Institute
• an annual travel award to assist young locals to travel abroad on educational or other worthwhile projects. Over recent years the destinations have included Belgium, India, Sri Lanka, Romania, Nepal, France, Canada, Australia, Indonesia, Honduras, Cuba and the U.S.A. 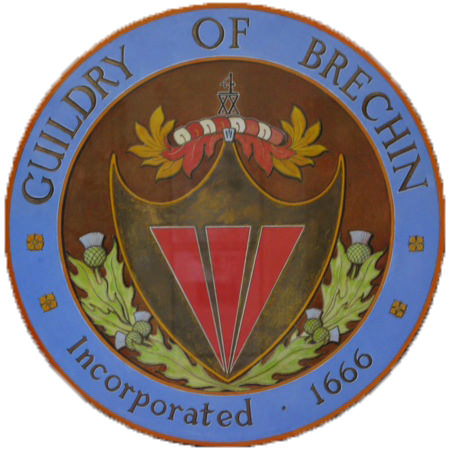