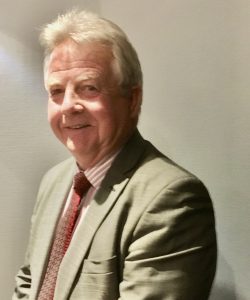 Ayr Guildry dates back to 1325, when the Merchants and Craft Guilds of Ayr sought to regulate and promote trade within the Royal Burgh. The members were the Burgesses of Ayr all of whom had paid their freedom fine and were entitled to the rights and privileges of freemen of the Royal Burgh.

Until 1975 the Dean (in common with other Deans of Guild in Scotland in their respective Royal Burghs) sat on Ayr Town Council (the only member who had not been elected by universal suffrage) and was recognised as the second citizen of the town. The Guild Court regulated building standards within the Burgh and the Dean was responsible for issuing minor warrants and completion certificates. Local Government changed in 1975 with the abolition of the Town Council of the Royal Burgh and with it the privileges of the Dean. The Guildry continued however to have close links with the local authority and for a number of years the Clerk of the Guildry was the Chief Executive of the District Council and the Treasurer, the District Council’s Director of Finance. Since then the structure of the local authority has changed again but the close links continue with South Ayrshire Council and with the wider civic community.

Ayr Guildry is the oldest voluntary organisation in the Royal Burgh and makes a significant contribution to civic life within the town. It seeks to plug a gap which was left after the statutory functions of local government had been fulfilled promoting Ayr as a vibrant place to live and work. Part of that commitment is engaging with other local organisations who seek to provide events and services within the town. It was, for instance, instrumental in organising the celebrations for Ayr 800 in May 2005.

It provides financial support to assist in the re-establishment of Ayr Flower Show. It also sponsors a young Apprentice of the Year Award at Ayrshire College, a Citizenship Award within the local primary and secondary schools, sponsors the MV Awards for volunteers and in addition organises social outings and an Annual Dinner for its members.

Further information can be obtained from the Clerk to the Guildry JohnHay@djdunlop.co.uk